After attending Burning Man for the first time in 2013, I was blown away by the variety and scale of artwork erected in the desert for the week-long event. Set to the backdrop of the Nevada desert, the intimate union of art, design, and technology was ridiculously, overwhelmingly inspiring. My head spun and I ached to participate. “I’m a graphic designer,” I thought. “I must get involved!”

Luckily, I was a newbie member of Phage, a science-based group in San Francisco boasting 100+ intellectuals and creative minds from various academic backgrounds. The Phage camp’s mission is to bring science to the sands of Burning Man via outreach activities and interactive learning opportunities. Shortly after Burning Man ended, I reached out to my camp and offered sketching services to anyone in need of a visual artist. Two fellow Phage camp members, Matthew Faulkner and David Brown, requested help illustrating their brainchild: a giant, musically controlled Tesla Coil. Yes, please!

They envisioned a structure towering twenty-five feet in the air, housing a caged, six foot Tesla Coil mounted on several large, curved legs. There was even talk of a DJ Booth installation and a furnished interior space in which willing participants could dance while the coil above them produced ten foot arcs of lightning modulated to produce sound. Matt and David dubbed the structure Coup de Foudre, a French expression which translates to “bolt of lightning” but figuratively means “love at first sight.”

With a Bachelor and Master degrees in Electrical Engineering and Computer Science already under his belt, Matthew was chipping away at a Ph.D in Computer Science. David, with a B.S. in Physics, was concurrently working on his Ph.D. in Applied Physics. These mad scientists had the vision and scientific understanding to conjure up the coil, but limited artistic aptitude. Armed with a Bachelor of Fine Arts in graphic design, and a shaky understanding of the coil’s functionality, I put graphite to paper and doodled a few preliminary sketches while referencing Matt and David’s Pinterest moodboards. From the desk of my Maryland townhouse, I snapped pictures of my drawings and emailed them to Matt and David for feedback. (All of our correspondence at this stage was via email, given our bicoastal locations.)

My first few rounds of drawings proved to be either scientifically improbable, highly dangerous, or just plain silly. I drew a rocket-like support structure housing a Tesla coil, with a DJ booth seated precariously on top of the coil, effectively placing the DJ in an electrical deathtrap. Oops. To eliminate further confusion, Matt and David created a rudimentary clay model to help illustrate their vision. The 3D model helped tremendously, and after a few more back and forth exchanges, we arrived at a suitable concept sketch of the Coup de Foudre.

The great unveil happened via email; somewhat anti-climactic but effective. Phage members greeted the concept sketch with great enthusiasm. Phagelings, (the camp’s term of endearment for its members), from various scientific and academic backgrounds with widely varying areas of expertise jumped on board to help with the project. 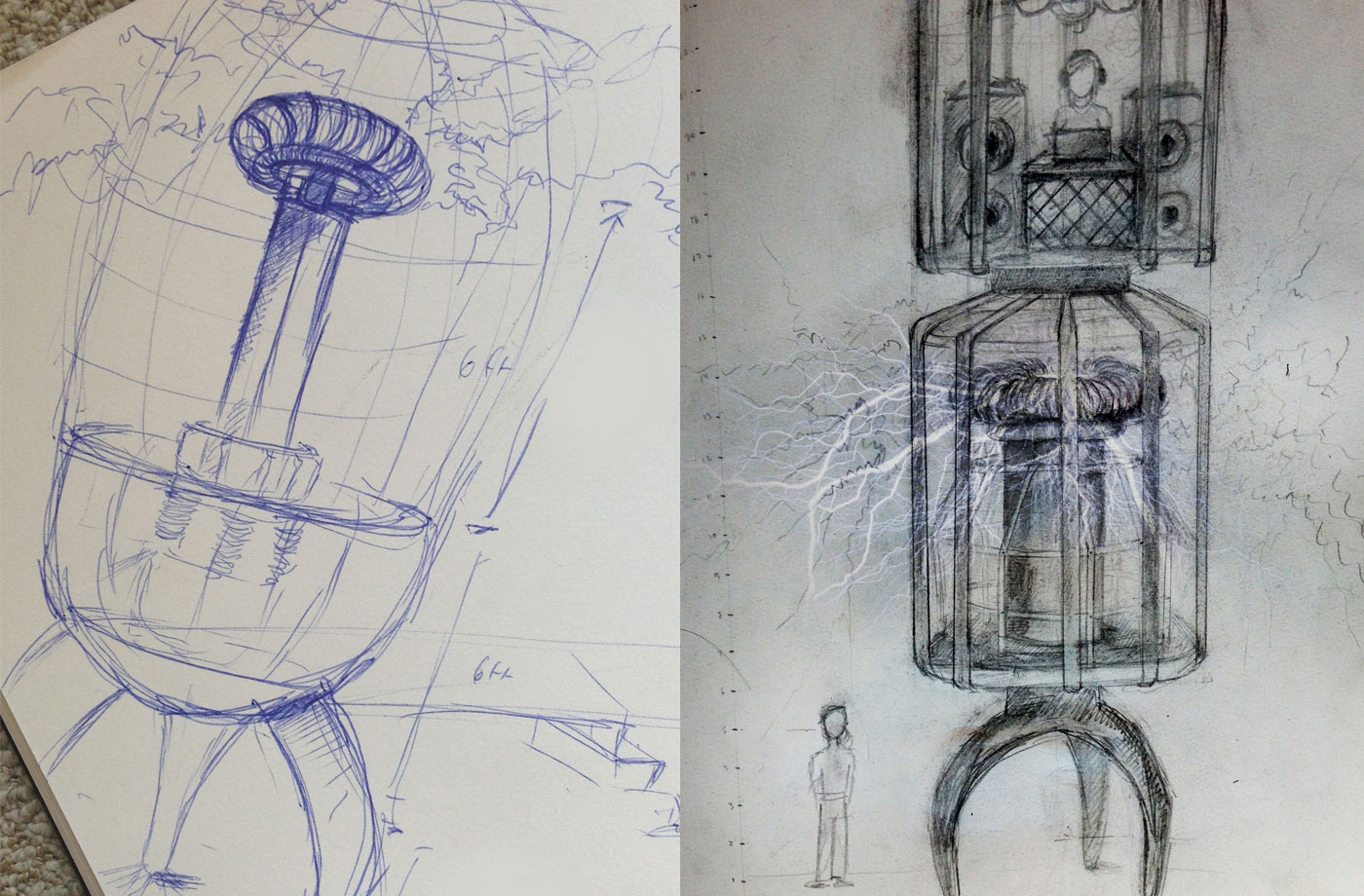 Early sketches depicting the Tesla coil entirely enclosed in a rocket-shaped structure (left)  and a DJ booth dangerously mounted on top of the Tesla coil (right). 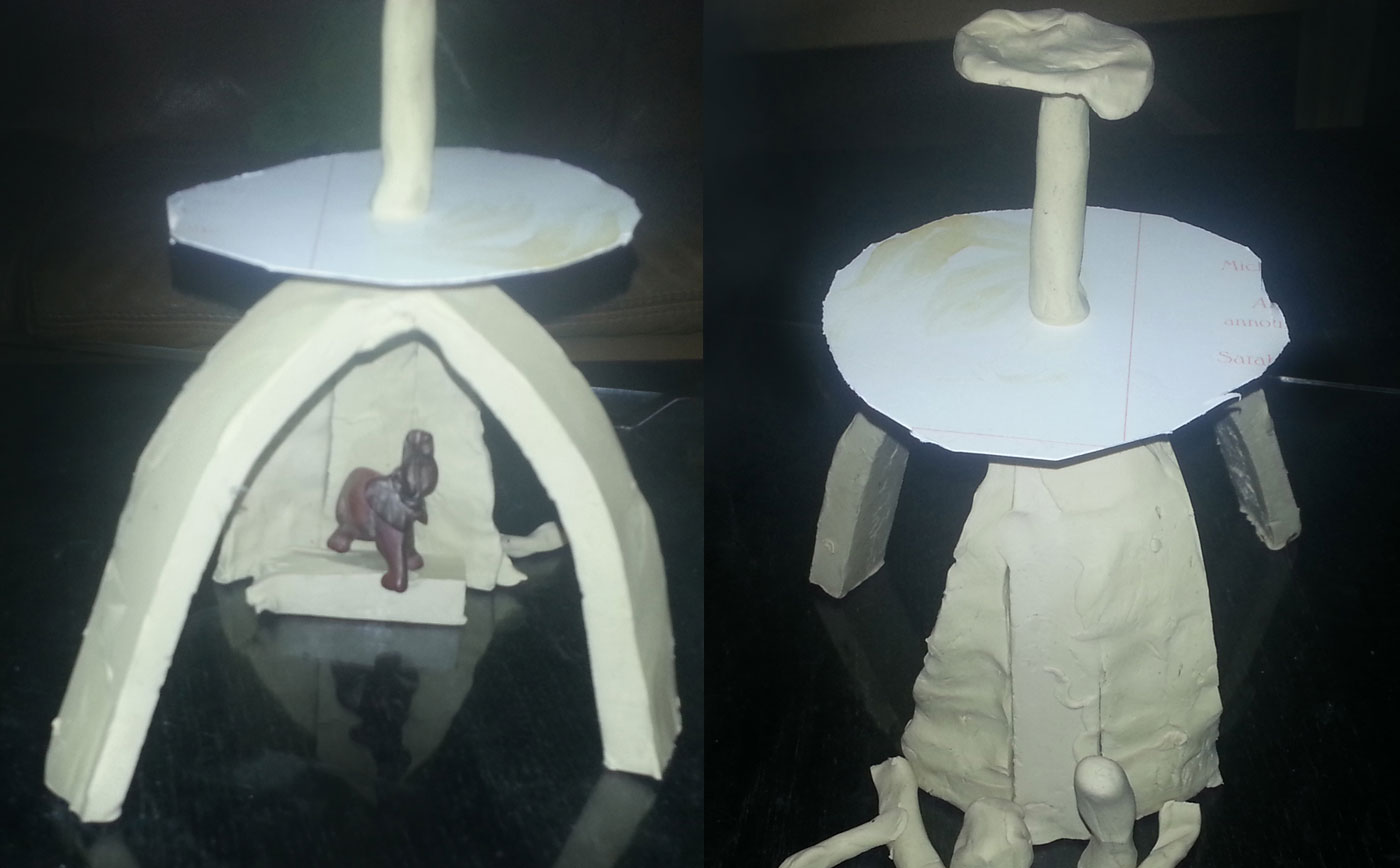 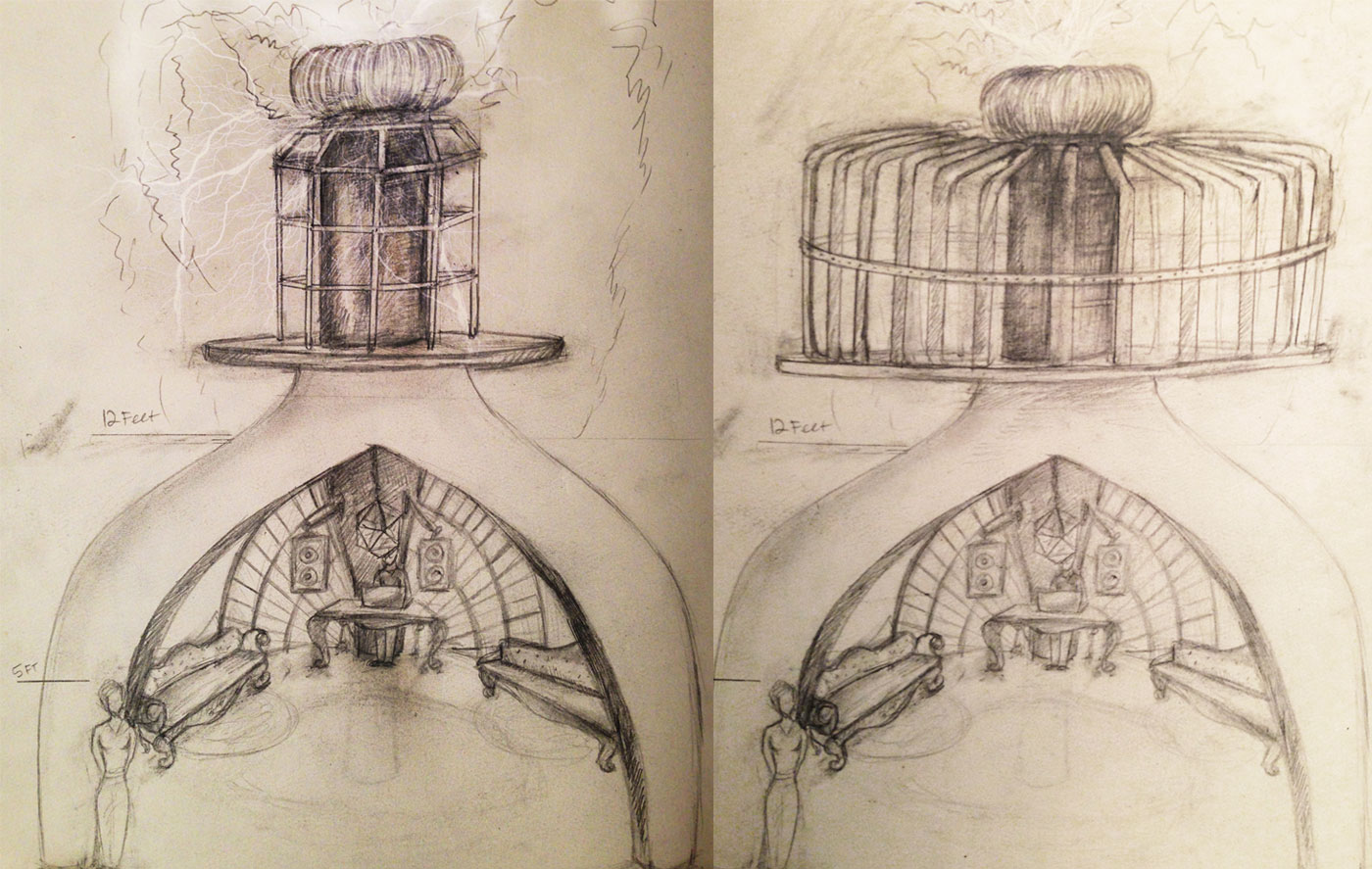 Finalized sketch presented to the group shown on the right.

We had people, time, and drive. Now, we needed money. Fundraising became a top priority. Jeanie Conner, a Software QA Engineer with a B.S. in Chemistry, spearheaded the Kickstarter fundraising campaign and coordinated social media efforts to spread publicity for the Coup de Foudre. The team brainstormed Kickstarter rewards: postcards, coasters, bracelets, a plaque, and a “making of” book that would document the project. I drew up a project logo, designed graphics for the rewards, and created promotional images for the Coup de Foudre social media pages.

Jason Porath, a visual effects artist, author and illustrator, created 3D renderings of the coil and supporting structure, and drafted various designs in Solidworks with the help of Sara Drakeley, a Technical Director by profession. Using computer generated images and footage of Matt and David explaining the project, Jason also put together a Kickstarter video detailing our undertaking. 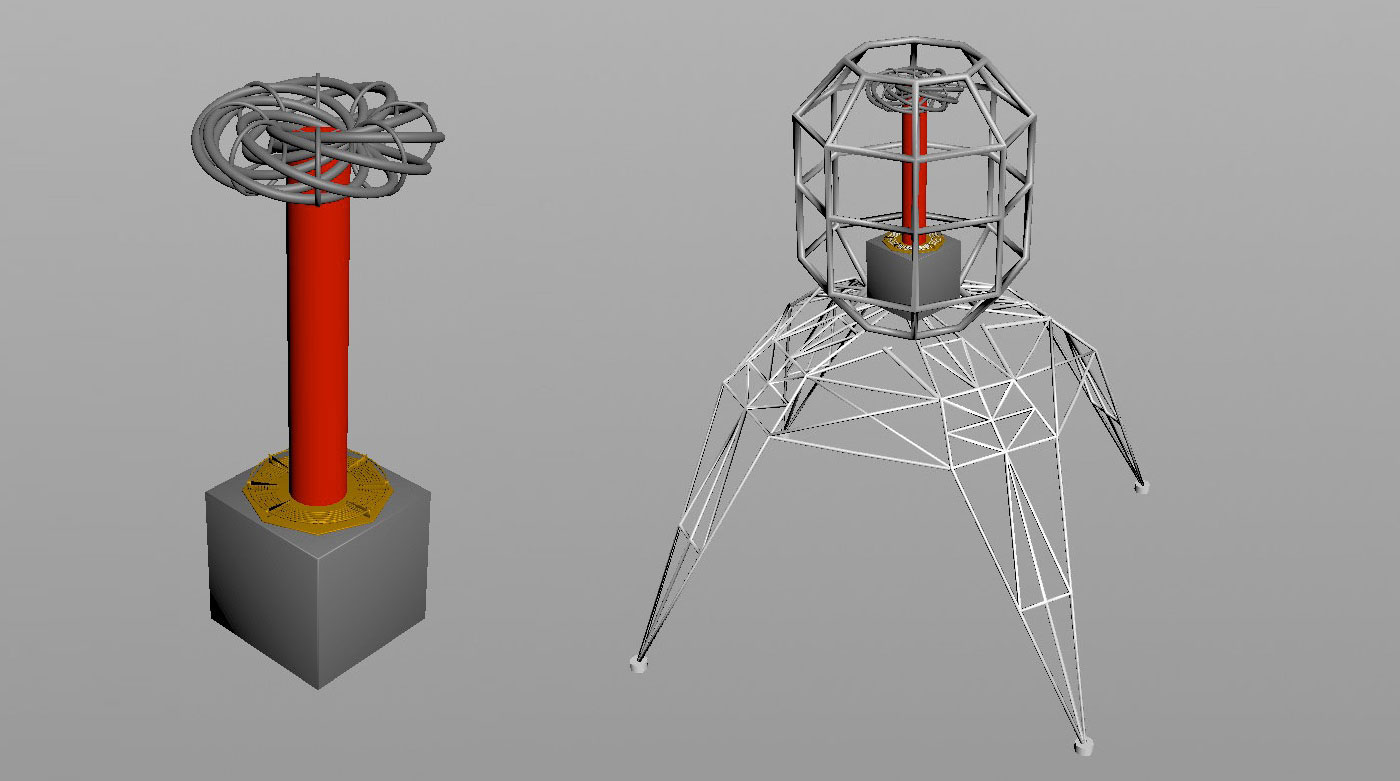 Further revisions on computer generated renderings of the coil, cage, and support structure.

Teamwork and accountability were absolutely crucial to completion of the fundraising campaign. While Jeanie drafted explanatory write-ups for the Kickstarter page and social media updates, Giselle Torres, a Registered Nurse, investigated bracelet clasp alternatives, while Anastasia Hanan, Partnership Coordinator and Design Researcher, sourced materials. As I emailed design rounds to the west coast for approval, Jason, Anastasia and other team members etched designs into leather and marble via lasers in a workspace provided by Two Bit Circus a collective run by lead engineer and fellow Phageling, Daniel Busby. Ultimately, the finished Kickstarter campaign was a great success, and the project reached its funding goals. The press took notice! Slate, Fest300, and Australia Popular Science wrote about our wacky and exciting project.

EPS files of graphics to be lasered onto Kickstarter rewards. 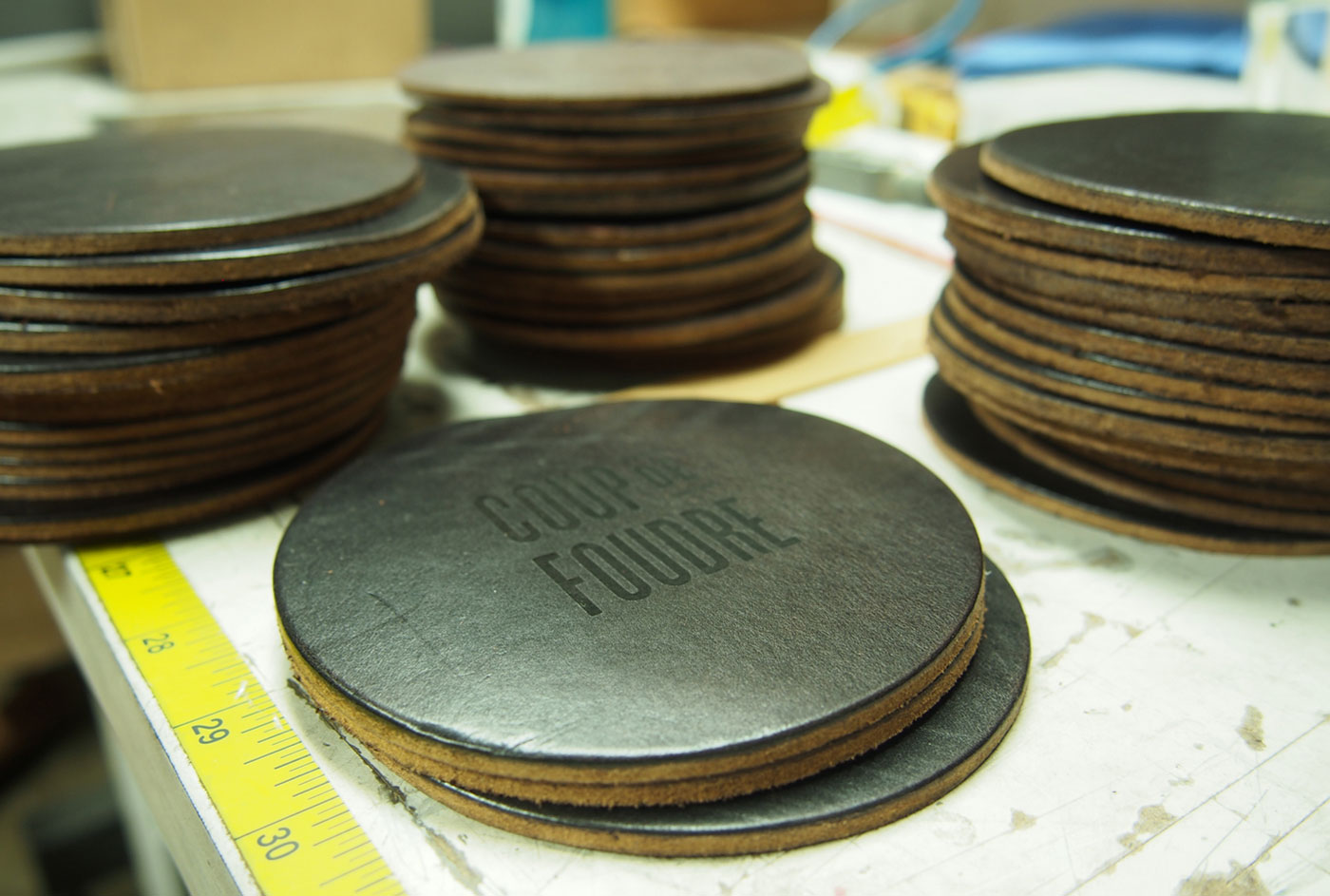 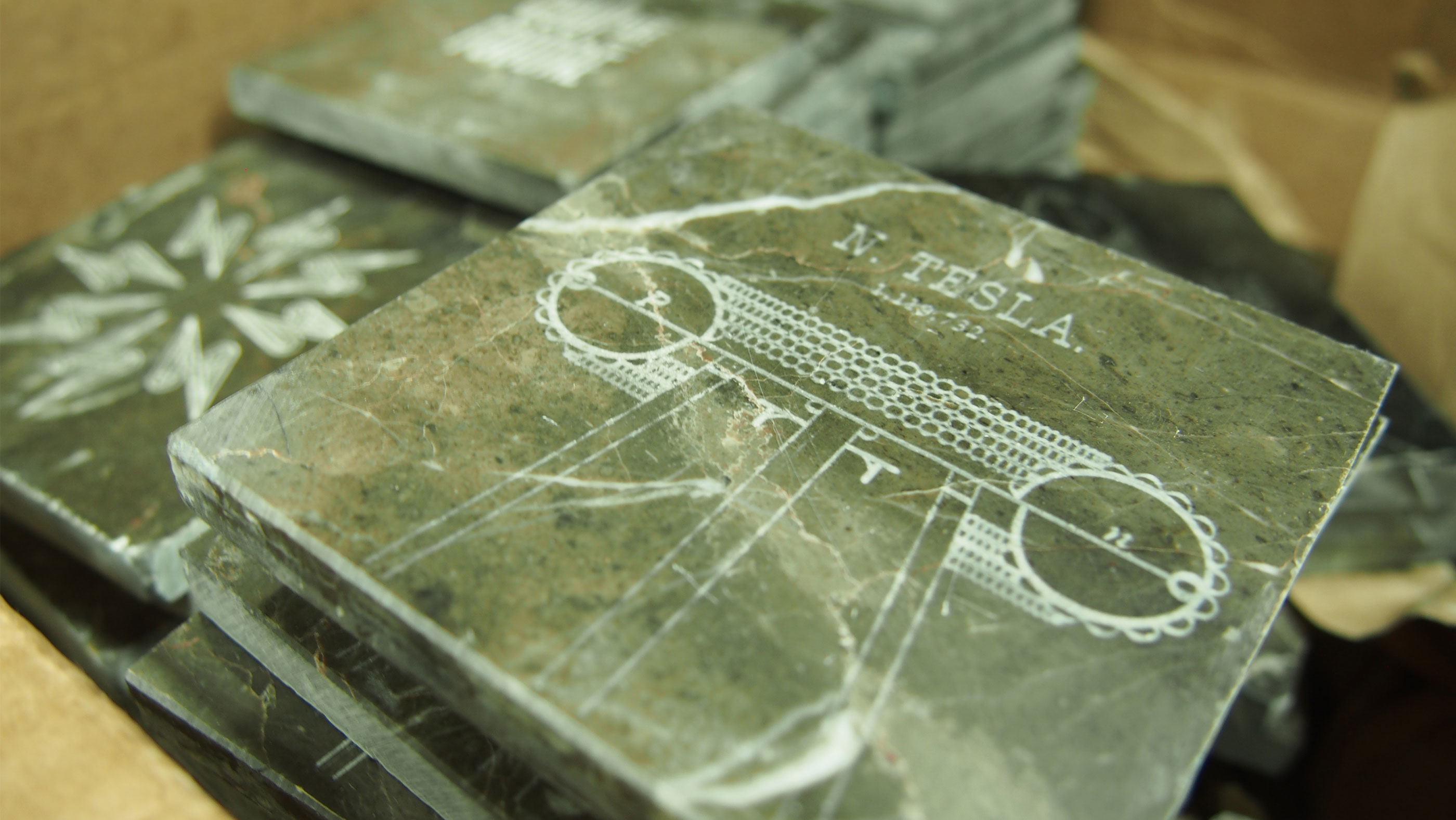 Although Jason’s 3D renderings of the coil and cage enclosure were extremely helpful in figuring out what was and wasn’t structurally possible, a viable support structure was still unresolved. According to the original design iterations, a cage with a roughly 10’ radius had to surround the toroid, (the doughnut shaped object at the top of the coil), to catch all the sparks. This unwieldy, yet necessary constraint effectively put an end to the fully enclosed cage idea. The challenge of what the final support structure would look like still needed to be addressed. After acknowledging the time crunch for building the support framework, Casey Handmer, a theoretical physics grad student, cooked up a structure based on intersecting spheres that was stable without needing additional struts. With Casey’s solution in place, construction could finally progress. 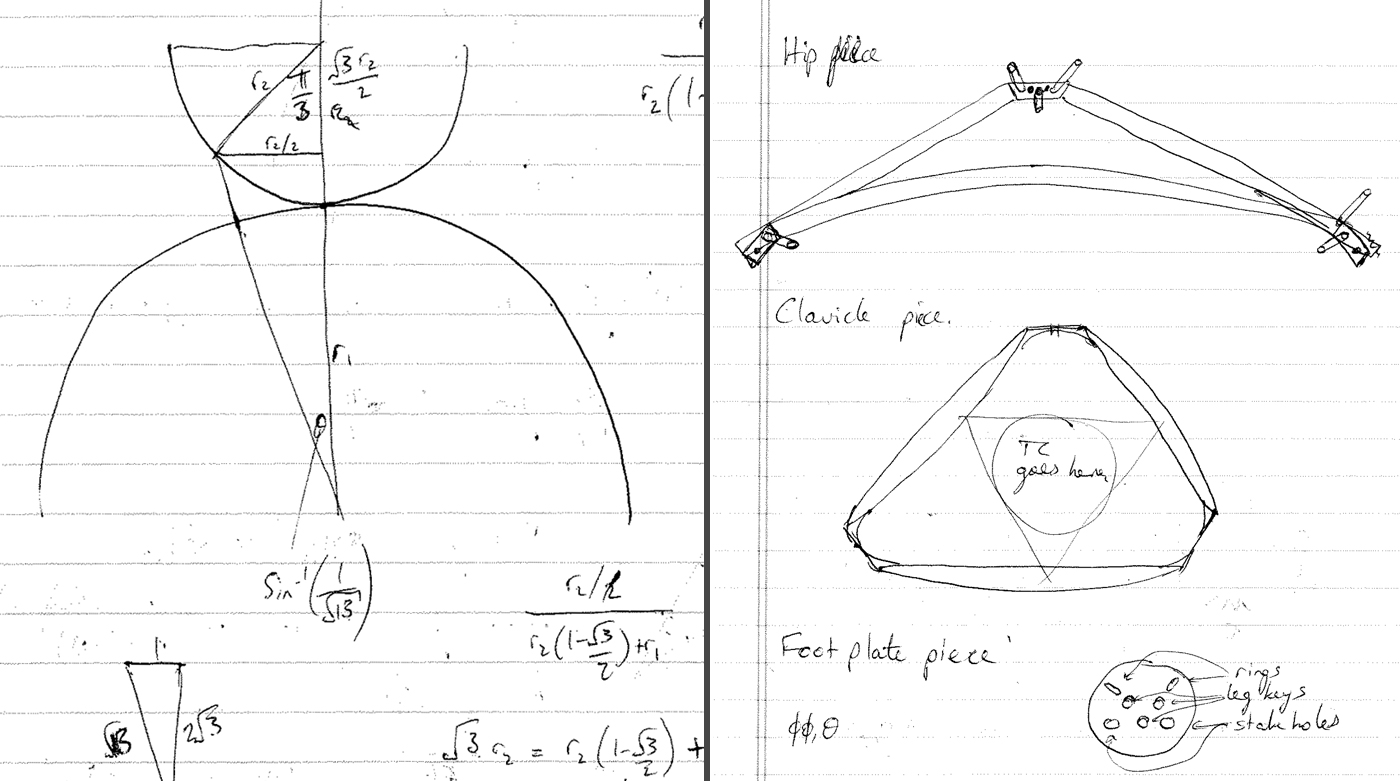 Physically building the coil was a laborious process that required many hours of work. Matt and David slaved away on their labor of love as well as tirelessly working on their respective Ph.D’s. A rotating cast of characters assumed various roles to keep the project momentum going. In addition to designing support structure and the toroid rings, Casey brought Marty Gibbons into the project, Construction Coordinator, General Foreman and Welding Supervisor in the entertainment industry, who procured affordable steel and aluminum, lead welding, assisted with assembly, and helped with electrical safety measures. James Baker, an engineering director at a solar energy startup in Pasadena, helped with early alternative structure designs, performed cutting and welding, and provided some electrical support work. 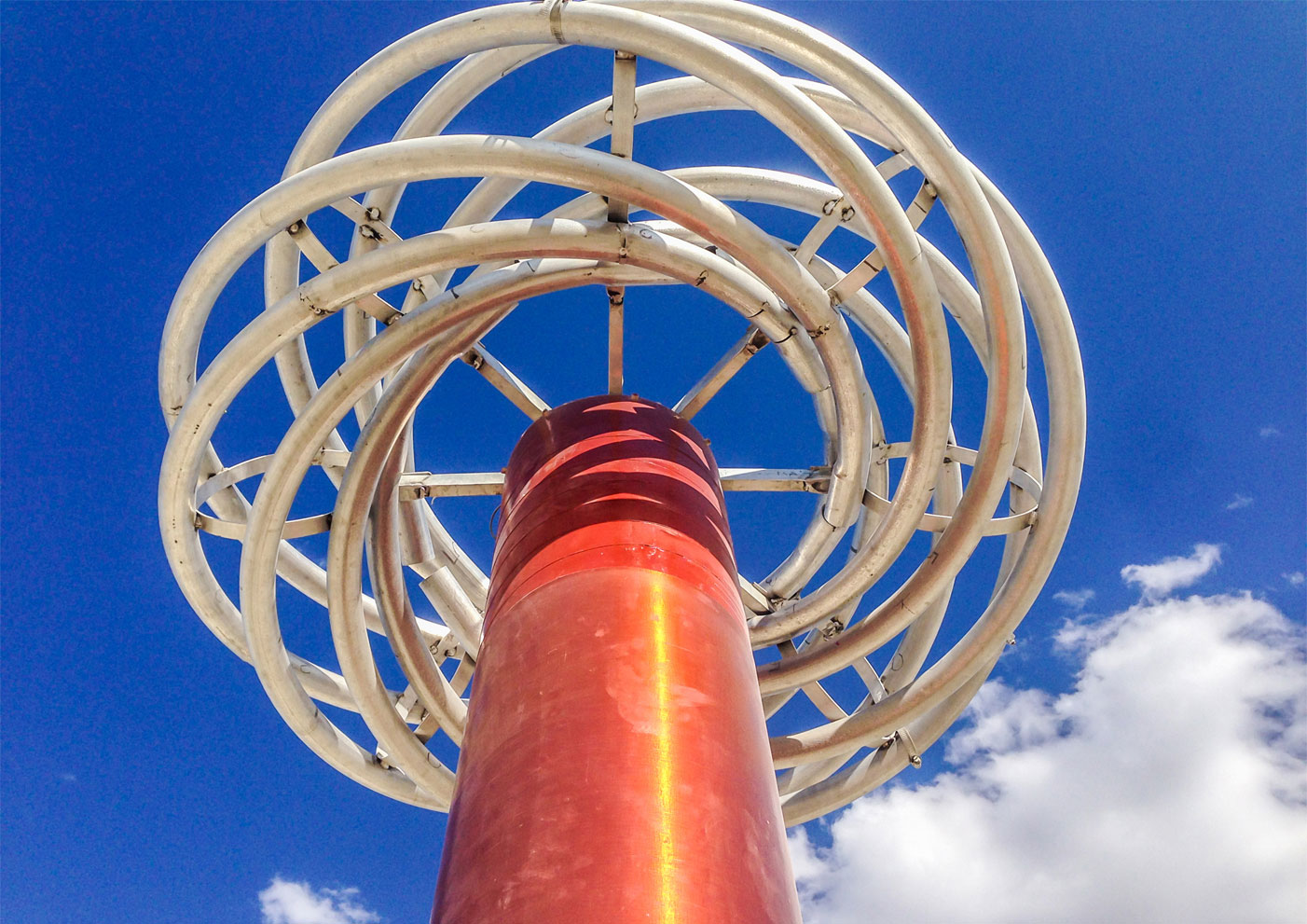 The toroid at the top of the Tesla coil. Photo Credit: Peretz Partensky 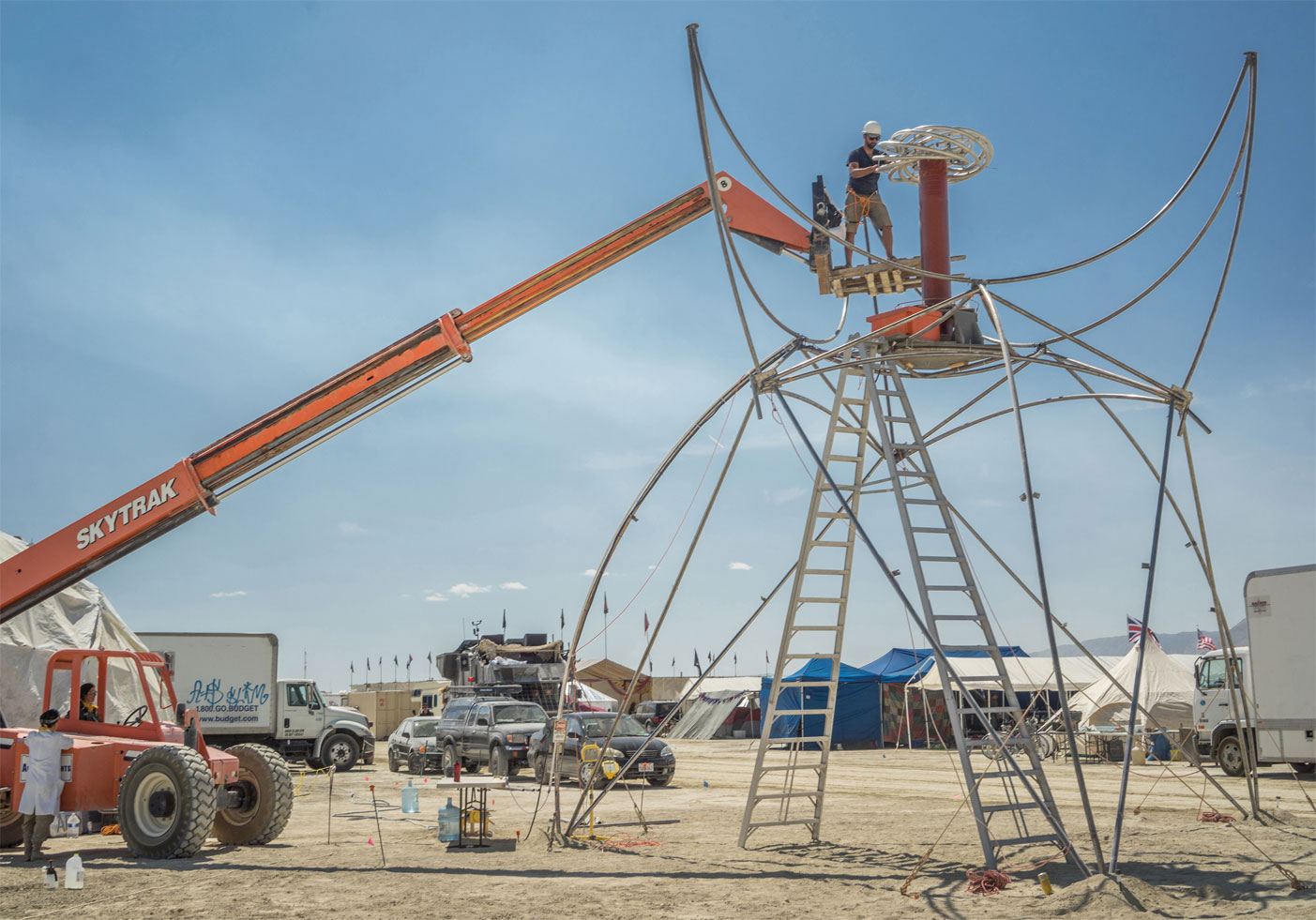 Labor continued onto the desert lands at Burning Man, where the team assembled curved metal legs and a crane was used to place the Tesla coil atop the support structure. The coil itself was controlled via piano keyboard that passers-by could play and interact with under the supervision of Matt, David, or another appointed team member with electrical know-how. As an additional safety precaution, team members laser-cut acrylic shapes and wrapped them with lit LED wires to illuminate the legs at night. The final design emerged looking majestic and unique in its own right, albeit drastically different than initially envisioned in the first few rounds of sketches and 3D renderings. Ultimately, the Coup de Foudre was a great addition to the already impressive collection of interactive Burning Man art. 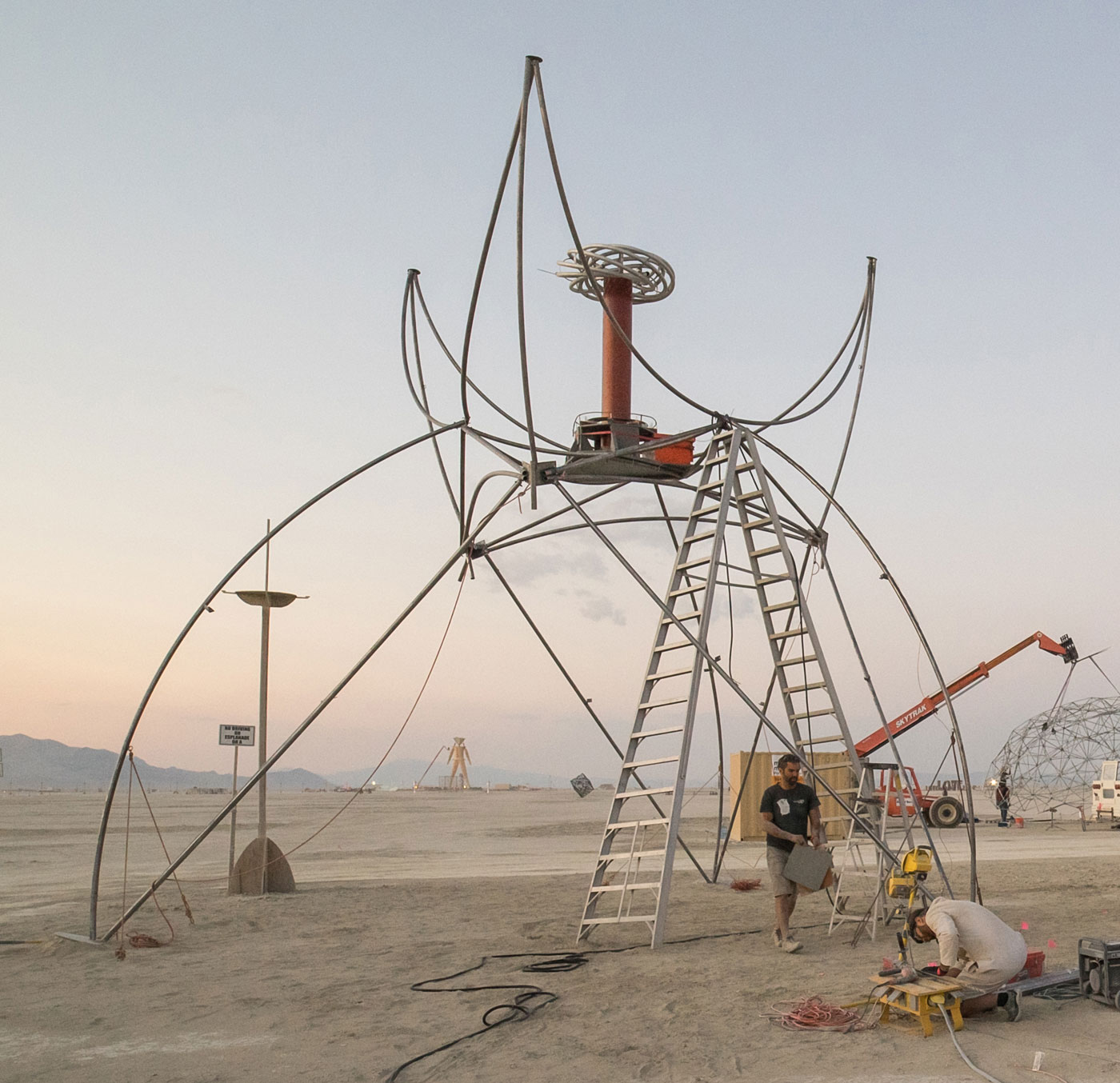 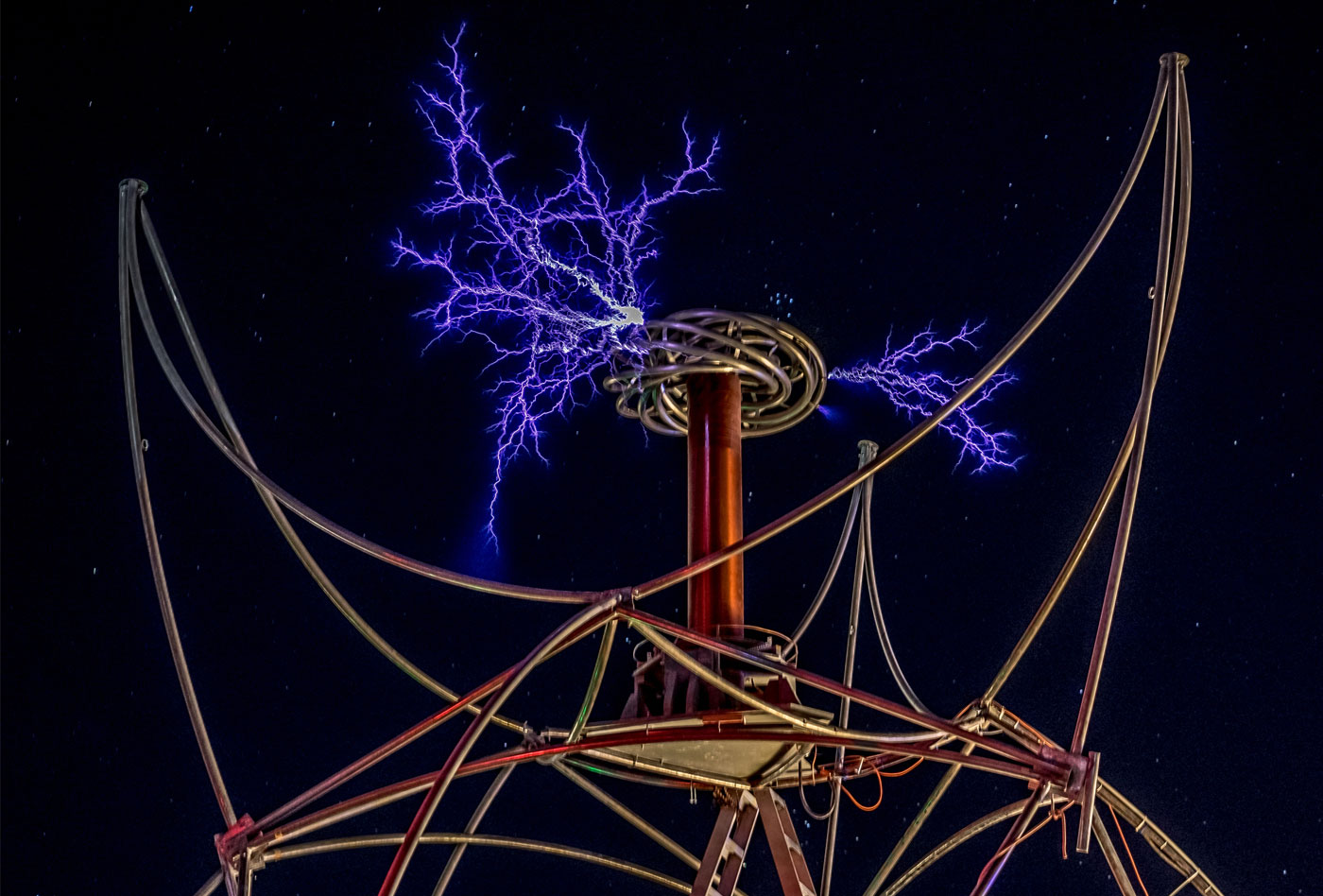 Working on the Coup de Foudre caused a fundamental shift in the way I perceived my role as a graphic designer. Prior to this project, my roles as a designer were usually defined and I typically understood most components of a given project. The experience on the Tesla coil was much different.

I was geographically distant from the rest of the team, had a tenuous understanding of how the coil was to function, and didn’t have a creative director weighing in on designs. This forced me to do research in an attempt to understand the workings of a Tesla coil and raise questions at any potential misunderstanding. Conversely, I learned that I didn’t need a complete 360 degree knowledge of a project to be able to utilize my own design strengths and be a useful team member.

Collaborating with a group of scientists, engineers and researchers from various academic backgrounds to realize Matt and David’s vision was uniquely humbling, informative and gratifying. I grew to understand the importance of having a passion project, and how engineers and scientists can work together with visual artists to make magic happen. A devoted team with solid communication, discipline and passion can accomplish anything, even if it’s a crazy ole’ musically controlled Tesla coil lighting up the sky at Burning Man.

Watch the Tesla coil live in action at Burning Man 2014!

Marina is a designer at Innate. Creatively inspired by just about everything, she spends her time sketching gift ideas, meticulously crafting Halloween costumes, and throwing punches on the bag at the UFC gym.

Tools and Tips for Collaboration Across Time Zones